Location: East Acton, parallel to northern side of Route 2, 0.8 mile west of rotary at MCI in Concord

Wetherbee Conservation Land’s most prominent feature is the farm field along Route 2 that is bordered on the east by Wetherbee Street. Formerly part of a farm of the same name, this 31-acre field is now one of only two actively farmed agricultural fields that belong to the Town of Acton.  The Massachusetts Department of Correction (for MCI Concord) has a license agreement with the Acton Conservation Commission to farm the field.  Typically they grow corn to feed the cow herd maintained at the Correctional Center on Barretts Mill Rd near the rotary .  (MCI Concord is permitted to use chemical pesticides, herbicides and fertilizer with prior written consent. Notices will be posted along the trail at the entrances to the field when chemicals will be used on the property.)  The remaining 41 acres of land, which extend to Alcott Road and Berry Lane on the north and west, consist of meadow, marsh, and woodland.

The trail system is located within the parcel’s wooded portion and is accessed by an open trail about three tenth of a mile long from Wetherbee Street along the northern edge of the farm field. The yellow loop trail is bisected by one short blue secondary trail, while another blue trail, outside the yellow loop, makes possible a side tour through the southeastern portion of the woodland, close to the field, passing along a stone wall for most of its length.

Just beyond the northwest corner of the field, a small, sloping, short-grass meadow, accented with crabapple trees, provides an inviting approach to the upland loop. South of this meadow lies a marshy habitat that in turn feeds a tiny north-to-south stream and vernal pool that separate the woods from the field’s western edge.  The property’s back section, further to the west, is wooded with secondary growth typical of New England upland and features red maple, black and red oak, and white pine, with a scattering of ash, bigtooth aspen, sassafras, hawthorn, and sumac. In the woods, old stone walls still define early boundaries. One of these, running north to south, is colonial or older; the others are more recent.

Despite the property’s proximity to the busy Route 2 corridor, the area is rich with many species of animals—particularly birds—and the vegetation, insects, rodents, and amphibians that support them. In addition to the upland tree species, the more moist areas are home to highbush blueberries, skunk cabbage, grapes, and many ferns and mosses. Lowbush blueberries and many species of wildflowers, including whorled loosestrife and licorice bedstraw, also flourish here. The field-edge vegetation includes viburnum and trumpet honeysuckle. 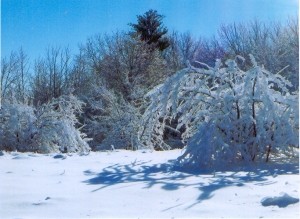 These varied and rich habitats attract and support white-tailed deer, coyotes—occasionally heard “singing” in the early morning—and garter snakes. In the spring, wood frogs and peepers send up a noisy clamor from two vernal pools (one on abutting private property). Breeding field birds include savannah sparrow, vesper sparrow (on the state’s list of threatened species and first seen here in 2002), swamp sparrow, red-tailed and sharp-shinned hawk, indigo bunting, and eastern bluebird. Breeding upland birds include hermit thrush, scarlet tanager, red-eyed and warbling vireos, cardinal, robin, black-capped chickadee, tufted titmouse, and white-breasted nuthatch. Coursing over the field during the summer, both barn swallows and chimney swifts gather the abundant insects. In fall, the bare field attracts flocks of American pipits and killdeer and is a favorite roosting area for large groups of crows. The field grasses attract a wide variety of dragonflies, damselflies, and butterflies.

In addition to walking, the area is suitable for cross-country skiing, horseback riding, snowshoeing, and tracking/birding. Outside of the growing season the wide, open agricultural field is a great location for stargazing such as watching the Perseid and Leonid meteor showers in August and November.