Great Hill Conservation and Recreation Land is a large property, diverse in topography, vegetation, natural features, and uses available to the public. Unlike Acton’s other conservation lands, Great Hill has a large open area, located behind the South Acton Fire Station, that has been developed for recreational uses. In addition to the main playing fields, there are picnic tables near a small pond which is a popular exercise area for local dogs.  A smaller playing field, located to the west of the main field, may be accessed directly from the fire station parking lot via a short trail through marshy woods and wetlands. North of the main playing fields, a large meadow slopes up to the edge of the woods, where the conservation land trail system begins.

To the west of the open area, a marsh that existed when the property was acquired has been dredged to create a small pond, suitable for skating in winter and fishing in the summer.  This pond, with its limited bottom sediment and low nutrient value, has attracted a variety of plant and animal species that are characteristic of the beginning stage of a pond’s evolution. Cattails, smartweed, and duckweed grow thickly around its edge, and sunfish and largemouth bass, which feed on the frog population, are well established.

Because of the property’s size and central location within surrounding residential areas, this conservation area is very heavily used. Its size has resulted in a complex trail system with seven red accesses, four blue secondary trails on the hill within a yellow loop trail, and one short blue trail outside the loop trail. The yellow loop trail’s most heavily used accesses are behind the fire station and on Main Street.  On the hill, one of the blue secondary trails skirts the summit, which, at 350 feet above sea level, is the highest point in Acton and, in the winter, offers limited views of the surrounding area. The blue trail that leaves and rejoins the main trail on the westerly side of the property allows access to and from the Discovery Museums’ parking lot.

The topography of this conservation land varies from extensive wetlands in the eastern portion to wooded uplands on the peak to the north of the open field.   The yellow loop trail passes under magnificent old white pines and through fern glades near the northern Piper Road entrance (at Oakwood Road), and stands of cherry birch, hickories and sassafras in other lowlands.   On other parts of the loop trail and ascending the hill toward the summit on the blue trails, this growth passes through stands of green mountain laurel which gives way to various hardwood species that dominate the climax forest.  Its mix of ash, hickories, beech, sugar maple, red, black and white oak provides habitat for songbirds, such as scarlet tanagers, red-eyed vireos, redstarts, and ovenbirds, as well as several varieties of owls.  A large wetlands area is located to the north and east of the hill.  Two small brooks drain from the hill into this wetland.

Great Hill hosts a variety of plant species, many of which are different from those growing on other Acton conservation lands because of the less acidic soil on the north slope. Here one may find doll’s eye, golden Alexander, purple-fringed orchis, and nodding trillium. Readily seen along many of the trails are other beautiful small plants, including lady slippers, fringed polygala, and pyrola. There are also, unfortunately, various invasive species, including a large stand of winged euonymous, or burning bush, on the southeastern side of the hill.   Large infestations of asian bittersweet are in the south west corner and on the south east slope of Great Hill.

Three brook crossings via wooden bridges or large, flat step-rocks, and many stone walls that mark boundaries from the Agrarian Age 250 years ago add to the property’s charm. Evidence of probable Native American use may be seen near the Piper Road wetlands area in the bowl-shaped depression in natural bedrock thought to have been an Indian grinding stone. Another landmark of note is an enormous erratic boulder located on the yellow trail on the steep slope in the northwestern portion of the parcel, just west of the Kelley Road entrance. 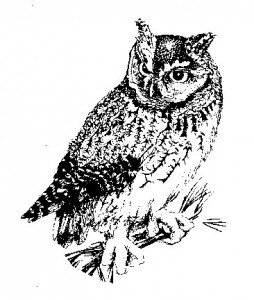