Guggins Brook Conservation Land is a predominantly low-lying, frequently wet area notable for three brooks that contribute to its attractiveness. Guggins Brook, flowing east from Boxborough through abutting Acton Water District property, forms a southern boundary of the property. Inch Brook, flowing north out of the southern wetlands, converges with Guggins Brook beyond the northeast corner of the Water District land. From this confluence the combined waters flow north and east parallel to a segment of the yellow loop trail and eventually converge with Fort Pond Brook, which forms the northeastern boundary of the property. Because of its frequently wet conditions, this conservation land is not suitable for either horses or mountain bicycles.

Guggins and Inch Brooks flow under trails via several culverts and boardwalks throughout the trail system. Short portions of both brooks have two different streambeds. The straighter channels were created during the 1930s as part of mosquito control projects. Parts of the original streambeds are still visible and some still carry water. These are identifiable by their older stone culverts with no metal, or by their meandering courses.

The property’s trail system differs from the usual model applied to most Acton conservation properties. Two loop trails of similar length, one yellow and one blue, combine to allow a 1.0-mile circuit of the property to be made following the outer portions of both loops. The yellow loop alone allows a shorter walk through areas drier in wet seasons than the blue loop. The yellow loop is also more scenic, passing through the central and westerly portions of the property. The blue loop trail follows the property’s northern and northwestern boundaries. Two short blue trail segments cut across bulges of the yellow loop. The southerly portion of the property is entirely wetlands.

One red access trail, from Central Street, passes through an open meadow beside Fort Pond Brook via an easement granted by the adjacent residential community. A second red trail, from the Massachusetts Avenue entrance, follows the edge of the southern wetlands, crossing into the Water District land for a short distance. Small boardwalks and the application of wood chips and “corduroying,” a practice of laying logs of uniform length side by side into a muddy base, have decreased the trails’ seasonal muddiness. A third red trail, heading toward the Idylwilde Farm fields from the northwesterly corner of the blue loop trail, connects Guggins Brook Conservation Land with the nearby Jenks Conservation Land and with Reed Farm Road in Boxborough.

One of the property’s most scenic areas is the cool, quiet hemlock grove through which the northeasterly segment of the yellow loop trail passes. Ringing this grove are tall white pines, beneath which large cinnamon ferns are prominent, along with hay-scented, interrupted, and royal ferns. Highbush blueberries and the vase-shaped witch hazel, whose spidery yellow flowers bloom in the fall, are common understory bushes. Part of the southwesterly portion of the loop trail passes through a small meadow, kept open by periodic mowing, while the southeasterly portion of the trail follows the top of a raised dike, created by the mosquito control projects of the 1930s, that forms one bank of the quietly flowing water of Guggins Brook. The occasional apple trees found on the property are remnants of the orchards once common throughout Acton.

Other trees found throughout the property include red maple, oak, and big-tooth aspen. Shrubs and vines include lowbush blueberry, Concord grape, and, less fortunately, a number of invasive species. Among these are buckthorn, oriental bittersweet, purple loosestrife, Japanese knotweed, Japanese barberry, and winged euonymus, also known as burning bush. Walkers should take care to avoid the flourishing poison ivy and small patches of greenbriar.

Look for a young American elm tree planted along the yellow loop trail near its junction with the access trail from Massachusetts Avenue. This tree is a blight-resistant variety known as “Valley Forge,” released in the late 1990s by the U.S. Department of Agriculture. It is one of a number of specimens planted throughout the town by a public-spirited resident who is attempting to restore this beautiful native tree. American elms have been almost destroyed by the elm blight introduced into the U.S. around 1930.

Within the Guggins Brook land, sightings have been made of the rare wood turtle, listed on the National Heritage and Endangered Species web site as a species of “special concern.” Deer, coyotes, beavers, owls, and grouse are found there as well. A good example of an effective beaver pipe has been installed in the old stone culvert that is the most upstream of the Guggins Brook culverts. 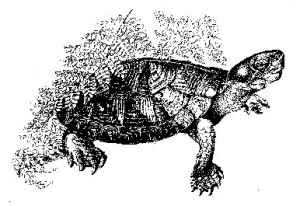