Location:  North of Acton Center on easterly side of Nagog Hill Road, toward Littleton

Nagog Hill and Grassy Pond Conservation Lands are contiguous properties, each with its own self-contained trail system. Together the two properties contain 273 acres within which a more than 3-mile circuit can be made by using the 0.2-mile red connector between the two properties.

Nagog Hill Conservation Land, bounded on the north by Nagog Pond and on the west by Nagog Hill Road, is a predominantly wooded, hilly property with areas of wetlands in its central and southerly portions. Much of the property was once cleared farmland, as evidenced by the many stone walls that lace the land and the occasional field juniper, a shrub that sprouts only in the open, still growing in the woods. Further evidence of farm use is seen in a few old apple trees along the southern segment of the loop trail.

The trail system comprises a meandering yellow loop trail, which follows the property’s perimeter, three blue secondary trails, and three red access trails: one from the Nagog Hill parking lot, the second from the Grassy Pond parking lot, and the third in the northeastern corner of the property, connecting Hazelnut Road to the loop trail near the pond. Both sides of the loop trail lead generally downhill through mixed woodlands toward Nagog Pond, one of the Commonwealth’s “great ponds” (defined by the state as “any pond or lake that contained more than 10 acres in its natural state”; Nagog and Grassy Ponds are both great ponds and are the only two in Acton).

Two parallel blue secondary trails cross through the center of the main loop trail, providing shorter circuits. The wetlands at the property’s center, largely unseen from the trails, drain into Nagog Pond along two seasonal streams crossed on short segments of boardwalk. From the main trail, just east of the large meadow behind the Hybid horse farm on Nagog Hill Road, a third secondary trail continues eastward through a lovely white pine grove for a short distance beyond a sharp turn in the main trail before turning north and rejoining the main trail.

Starting a counterclockwise circuit of the loop trail from the Nagog Hill parking lot, the trail passes near a large vernal pool, one of several within this property, on the south side of the meadow behind the horse corral. This pool provides breeding habitat for several important species of amphibians including yellow-spotted salamanders as well as insects that begin their reproductive cycle here in the spring. The open meadow, one of very few in Acton’s conservation lands, is covered seasonally with blooms of clover, Indian tobacco, lady’s thumb, yellow wood-sorrel, spotted touch-me-not, goldenrod, aster, wild geranium, beggars-tick, and milkwort.

Not far beyond the vernal pool and the loop trail’s easterly entrance to the woodland, the trail turns northerly at a large rectangular stone pile, and the blue trail through the pine grove continues straight ahead. These stones may be the ruin of a structure built by Native Americans or the result of colonial and later farmers’ field-clearing activities. Also look for flowering plants in season such as wild oats, lady slipper, starflower, Canada mayflower, wild sarsaparilla, pipsissewa, rattlesnake-plaintain, wild lettuce, silverrod, whorled loosestrife, violet, and several kinds of asters.

A bit further along the loop trail, north of a footbridge crossing, look for a large glacial erratic boulder called Egg Rock, located on the southwesterly side of the main trail. Around this point, the area ahead opens up to a view of a golf course, and the trail goes alongside it much of the way to the pond. The two blue secondary trails come in from the west along this stretch, and the red access trail from Hazelnut Street joins it from the east beyond the golf course, shortly before the trail turns west and parallels the pond for a short distance. 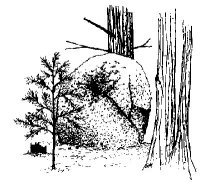 Walking uphill away from the pond on the western side of the loop trail, one follows an old cart track and, after passing the western end of the two blue trails, arrives at a junction, where the red access trail leading to the Grassy Pond Conservation Land begins. South of this junction, the loop trail passes through different habitat, characterized by low shrubs, berry bushes, small grassy areas, and remnants of an old apple orchard with entwining bittersweet choking several trees. The trail crosses the previously mentioned wetlands, spanned by boardwalk, and goes through a small meadow before leading back to the parking lot.